Now on Tour - Love, Lies and Mistletoe by Jennifer Snow!

Just in time for Christmas, a sweet, holiday romance! Love, Lies and Mistletoe in on Review Tour! And there's a great giveaway to go along with it so make sure you enter! 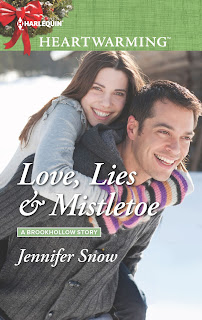 As a detective in New York, Jacob Marx had been deep under cover in a drug cartel…until a bust went terribly wrong. Now posing as a good guy is proving even tougher. Since the force sent him to Brookhollow to lie low as a deputy sheriff, he's been struggling to stay detached from the townspeople. Especially Heather, the gorgeous, high-heeled bartender at the local pool hall who asks too many questions. Tempted as he is, he can't allow himself to connect with her or anyone else. His career and safety are at stake. Of course, a little flirting couldn't hurt… Could it?

“Well, there you go. Longest eight-minute ride of your life,” Jacob said.

Heather unbuckled her seat belt and faced him. “Aren’t you going to stay to help decorate the tree and see the lighting?”

He really had nowhere else to be. Technically, he was on duty. And technically, this was his important assignment today. “I guess I could stay for a bit.” He shut off the car and reached for his gloves in the backseat, just as she went to grab hers.

Their heads butted and she jumped back. “Ow.”

He laughed. “Sorry. You stay there. I’ll get the gloves.”

Instead of handing hers over, he held one open for her.

She sent him a funny look as she slid her hand into the soft cashmere, then she held her other hand up for the second. “I’ll pretend that wasn’t totally awkward,” she said as she opened the door.

He touched her arm, stopping her.

She turned back in surprise. “What’s wrong?”

“Nothing. I just want to say thank you...for making the effort.” He wasn’t exactly making it easy for people in town to get to know him, and she could have continued ignoring him like everyone else.

“No problem...but I’m going to be gone soon, so you’ll have to step up if you want people around here to accept you.”

And what if he only wanted acceptance from the one person who was leaving soon? Then what?
Bio:

Jennifer Snow lives in Edmonton, Alberta with her husband and four year old son. She is a member of the Writers Guild of Alberta, the Romance Writers of America, the Canadian Author Association, and SheWrites.org.  She is also a regular blogger on the Heartwarming Authors site and is a contributing author to Mslexia Magazine, WestWord Magazine and RWR. She has also taught RWA Chapters courses online.  Her 2013 Holiday Romance-The Trouble With Mistletoe was a finalist in the 2014 Golden Quill Contest and the Heart of Denver Aspen Gold Contest.

Her publishing credits include two holiday novellas, previously published by The Wild Rose Press, now re-released or being re-released as self-published editions through Amazon. The Mistletoe Fever was an Amazon bestseller for two weeks in the category of Kindle Short Reads. Her six book small town, Brookhollow series is published through Harlequin Heartwarming and she has a new MMA sports romance series releasing through Berkley/NAL Intermix in 2015. RT Reviews has given each of her Brookhollow series books 4 stars.

She also hosts an annual SnowGlobe Award contest in recognition of holiday themed romance stories, with over forty entries each year, with participants ranging from new authors to NYT Bestselling authors, such as Brenda Novak and Sarah Morgan. More information about the contest can be found at www.snowglobeawardcontest.vpweb.ca
She is active on her website, Facebook, Twitter, and various blog sites and has a monthly author newsletter.