Today kicks off a week long Release Blitz for The Pleasure Principle by Kimberly Adkins. Schedule below! 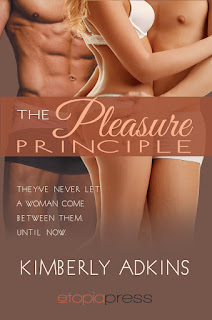 They’ve never let a woman come between them. Until now.

Anderson Cain and Edgar Brax have been best friends since college, two men with very strict—and very different—approaches to finding love: one by studying the physical act of sex, the other by mastering the art of dominance and control. But throughout their relationship, one thing has remained a constant: They’ve never let a woman come between them. Until now

Shy and mousy Alice Dahl spends her days cleaning houses for clients who value discretion. In her bulky uniform, glasses, and cap, she appears non-descript and unobtrusive, and does her job without asking questions. Until she begins working for the secretive, and stunningly gorgeous, Dr. Anderson Cain, who awakens a sexual longing in her that she can’t ignore.

Determined to take a chance, for once, Alice embarks on a masquerade into the exclusive New Orleans underworld of Dominants and Submissives. Her stunning makeover gains her admittance at Damsels, but the owner of the Club, Edgar Brax, senses her innocence the moment he sees her. The Dom inside him feels a powerful and all-consuming need to protect her and make her his own. Until he finds out that the girl he’s set his heart upon is his friend Anderson’s next subject. They’ve never let a woman come between them before. Perhaps this time, they might enjoy it…

He loomed over her, his jaws clenched, eyes lit with fire. He placed both hands on the wall on either side of her shoulders, arms locking her into place. Alice should have been nervous, pinned down like that, but instead she felt a rush of exhilaration. "Cher, I'll be damned if allow you to give it away to someone undeserving. You leave me no choice."

Julian spread his legs on either side of her hips, caging her. Intense eyes watched her reactions carefully as he took hold of her hands, still clutching the undone gown. She was no match for his powerful grip and he raised her arms over her head, easily restraining both wrists with his left hand.

Kimberly Adkins is an author and artist who spends her spare time working on worm hole theories so she can go back in time and enter Star Gate's 'Get in the Gate' sweepstakes as many times as it takes to win.